The Importance of Listening Without Interruption

by Atara WertentheilMar 12, 2019Dating and Relationships

There is a tendency for anyone in a deep or important conversation to try to think of their response – or interrupt with their response – any time they are being spoken to in a way they disagree with. 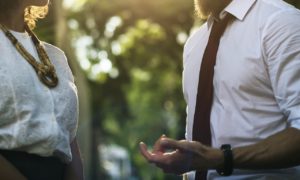 This is especially true when engaged in a conversation or argument with a significant other, a child/parent, or anyone that you love. It is also true with coworkers, roommates, and friends. It can sometimes be difficult to listen to all the other person has to say without interrupting with thoughts, opinions, or ideas of our own.

We may be trying to be helpful, we may not even realize we are doing it, or perhaps we feel like we are defending ourselves from some type of personal attack. But this can be problematic, as interruptions may hurt the core of healthy communication.

Why to Stop and Listen

Communication often relies on the relationship between two individuals. There has to be this feeling of trust and respect for the conversation to be productive and for both parties to leave it feeling heard.

Interruptions interfere with your ability to establish healthy methods of communication within the relationship, as when you interrupt, you suggest that what the other person is saying is less important than what you have to say. For the person that is being interrupted, the implication is that you do not respect them enough to grant them your time.

There are several other issues as well:

Healthy communication is critical in any type of relationship, from marriage to professional relationships. Listening openly shows respect, reduces confusion and misunderstandings, and keeps emotions at a more manageable level. If you are struggling to communicate in your relationship, call one of our psychologists on Long Island today.

If you have any questions about individual, group, or couples therapy (marriage counseling) or about working with a psychologist/therapist please do not hesitate to call.

With offices in Garden City and Rockville Centre, NY, we’re available for anyone that needs help on Long Island and in Nassau County.